Celebrating 20 glorious years of The Brasserie! 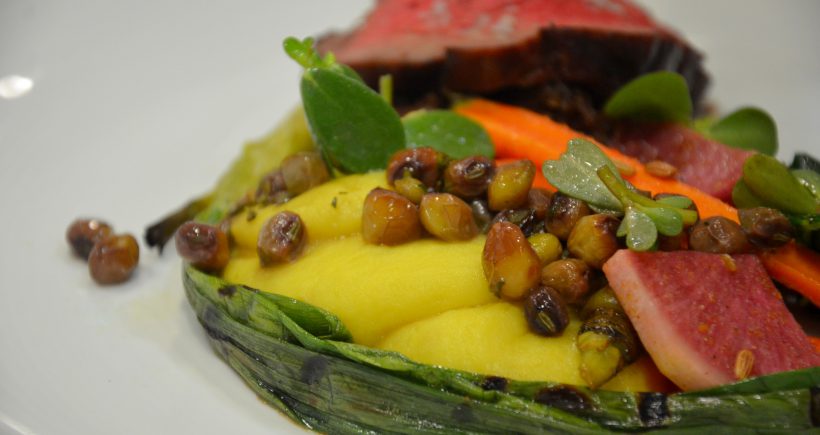 It was a night to remember.

The Brasserie’s 20th Anniversary celebrations made all the more memorable with the reunion of seven past and present Brasserie chefs (a complete list of the chefs is below), who once again, entered the Restaurant’s kitchen to prepare a magnificent five-course wine-paired Gala Dinner.

Our latest exciting edition to Cricket Square, The Caboose, was the setting for the opening cocktail party. As the sun set on the weekend, guests enjoyed our mixologist’s refreshing cocktail concoction of Ilegal Joven Mezcal, Local Bilimbi Shrub, Lemon and Soda accompanied by a selection of mouthwatering canapés including Local Land Crab Arancini, Seared Wahoo with green mango, Smoked Brisket Molote and Rainbow Runner Ceviche prepared by Chef Arte and Chef Thomas. All the while learning about the Brasserie Bee Program established by beekeeper Efrain Alarcon, who brought his display hive along to give people a unique insight into the inside of a bee hive.

Jokes were not spared as each chef introduced their dish for the evening and reminisced on their time spent at The Brasserie, for some, nearly a decade ago.

Guests bypassed The Brasserie’s organic garden en route to the Restaurant, and seeing firsthand, the farm-to-table produce that made up a large percentage of our exclusive Anniversary menu.

The kitchen worked meticulously as the first course, created by Chef Pushkar of Scotch Bonnet Pepper Cheese Naan with gooseberry chutney, Breadfruit & Sweet Potato Chaat with yogurt, tamarind and mint and Pani Puri with roasted garden beets and green juice, was plated. The smell of freshly baked naan bread wafted from the kitchen as guests wet their appetites with carefully selected wine from Maresa, Spain.

Chef Joe made the most of Cayman’s locally caught snapper. His dish was topped off with slow stewed garden tomatoes, scotch bonnet and crispy potato, accompanied with a French Les Heritiers du Comte LAFON wine.

The Niman Ranch Pork Belly, cooked perfectly by Chef Greg, melted in the mouth and made the tastebuds dance thanks to its accompanying ingredients of The Brasserie’s suriname cherries, apple, a selection of edible flowers and herbs and burnt honey. The third course was washed down with a Capiaux ‘Chimera’ Pinot Noir from the Sonoma Coast in California.

There’s always room for dessert, especially when it is Valrhona Chocolate Royale! The fifth and final course of our Anniversary Dinner was accompanied with housemade passionfruit cremeaux and coconut sorbet using the drupe from the Flowers family’s coconut plantation. The caramel flavours from the Mendoza dessert wine capped off a fun and happy evening of food, laughter and memories.

Thank you to all the chefs, the camaraderie of our hardworking Brasserie staff, and you, our loyal customers, for helping us to mark this incredible milestone. Here’s to the next 20 glorious years of The Brasserie!

A short biography of each chef is provided below. Please visit The Brasserie’s You Tube channel to view the 20th Anniversary video.

Chef Dean Max is Owner of DJM Restaurants. He has achieved multiple James Beard nominations for Best Chef, crowned King of American Seafood in 2010, wrote a cookbook called “A Life by the Sea,” and holds many restaurant accolades.

Chef Artemio Lopez’s experience expands more than 20 years in eight different countries. From France to Kosovo, Arte assisted setting up the first Mexican restaurant in Pristina. He worked at Casa Alfonso in Spain at the time the restaurant was awarded a Michelin star.

Chef Thomas Tennant graduated from the University of Delaware in 2006 with a Bachelor of Science in Hotel and Restaurant Management. In 2016, Thomas joined The Brasserie and now spearheads the menu at Fi’lia by Michael Schwartz in the Bahamas.

Chef Joe Mizzoni was Executive Sous Chef in the DJM Inc. flagship restaurant, 3030 Ocean. Joe opened Stubborn Seed in Miami with Chef Jeremy Ford in 2017. The venue was awarded Best Restaurant in Miami and 4 stars in the Miami Herald within the first eight months.

Chef Niven Patel was recently voted Best Chef in Miami. Niven oversees two locations of Ghee Indian Kitchen and has turned his home farm, known as ”Rancho Patel”, into the main source of ingredients for his restaurants.

Chef Brad Phillips studied a business degree from the University of Toledo and a culinary degree from the Culinary Institute of America. Prior to joining the Avocado Grill family, Brad worked at Chef Dean’s 3030 Ocean, Latitude 41 in Columbus and Asador in Dallas.

Chef Pushkar Marathe is currently Executive Chef/Partner at Ghee Indian Kitchen, recently awarded Best New Restaurant with friend Niven Patel. He has worked all over the world, including Chef Dean’s 3030 Ocean, the James Republic in Long Beach and Ritz Carlton in Qatar.

Greg has worked in some of the best kitchens worldwide including with Sergi Arola of Arola, Bruno Menard of the Dining Room, Eric Ripert of Le Bernardin and, of course, The Brasserie. Greg is now Partner and Executive Chef at Brick Farm Tavern in Hopewell, New Jersey.