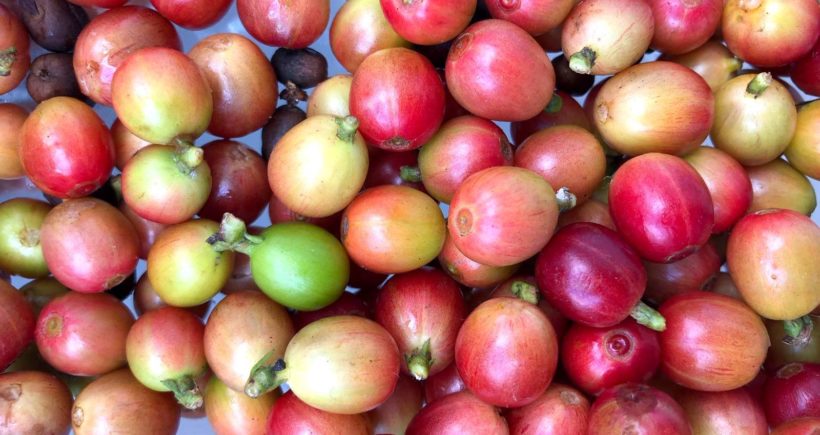 Many people think of coffee as brown, dry beans that grow from the ground.  Instead, coffee is a “cherry” that grows from plants. Here is a handful that we have just harvested from our shrubs in Cricket Square.

Coffee isn’t just black water. Many of the nutrients in the coffee beans do make it into the final drink, which actually contains a decent amount of vitamins and minerals including massive amounts of antioxidants.

Did you know that coffee doesn’t just keep you awake — it may also make you smarter? Yes that’s what I said! Caffeine blocks an inhibitory neurotransmitter in the brain, which has a stimulating effect. Controlled studies show that caffeine can temporarily improve mood, reaction time, memory, vigilance and general brain function. Not only can coffee make you smarter in the short term, but it may also protect your brain in old age. No wonder we’ve chosen coffee as one of our favourite superfoods!

Caffeine, partly due to its stimulant effect on the central nervous system, both raises metabolism and increases the oxidation of fatty acids. That’s why you tend to find it in many commercial fat-burning supplements. It can also enhance physical performance.

Coffee appears to be protective against certain liver disorders, lowering the risk of liver cancer by 40% and cirrhosis by as much as 80%.

Despite its many benefits, just remember to drink coffee in moderation and avoid adding sugar. If drinking coffee tends to affect your sleep, don’t drink it after two in the afternoon.

Read another Brasserie blog called ‘The Art of Coffee‘ to learn all about our unique Brasserie Barista Program and why we are known as one of the best coffee spots in the Cayman Islands.