For the love of swordfish 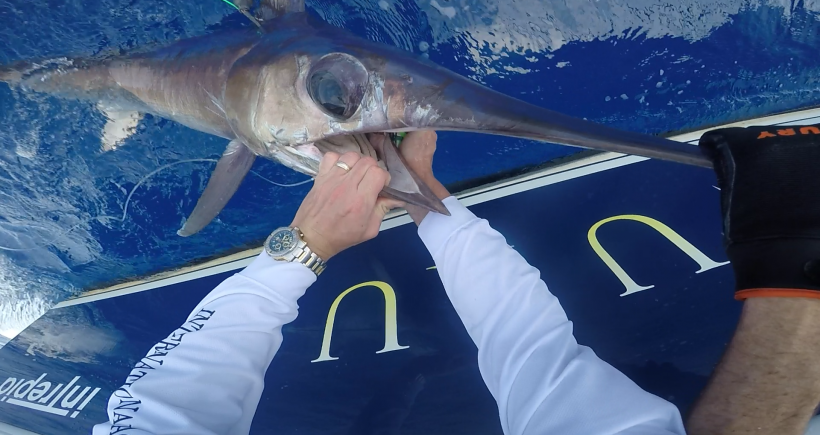 Swordfish are one of the most lucrative fish in the world.

That’s according to Gray FishTag research scientist Travis “Tag” Moore, who has over 20 years’ experience as a recreational fresh and saltwater angler.

Travis’ involvement in the industry has taken him around the world.

“I worked in Turkey and Morocco as part of an international agreement between the United States and each respective country. I worked with commercial fishermen to design a version of swordfish buoy gear to replace drift gillnet fishing. The use of drift gill net to target swordfish has been banned in the Atlantic and Mediterranean. We were teaching the commercial fishermen how to build and fish more eco-friendly gear type as well as land economically more valuable fish. The work was a success and the fishermen from both countries are now fishing the new gear type.”

He says given the knowledge that swordfish is so highly valued, it’s surprising that we don’t know much about the fish.

Perhaps it’s because they are one of the fastest fish in the ocean, timed at over 50 miles per hour, making them difficult to catch and study.

“Swordfish are also hard to study because of their environment. Swordfish are a deep-water fish, spending the daylight hours at depths around 2000ft. So, conventional methods to catch the fish, much less track or study the fish, are obsolete.”

However, Travis says the Cayman Swordfish tournament is single-handedly becoming responsible for more satellite tagging data then anywhere else in the world.

“The Challenge provides us with a consistent avenue to tag swordfish every year in the Cayman Islands.”

The swordfish feed around the islands during their yearly migration from Canadian waters down to the warmer Caribbean waters. Cayman is quite isolated making this area the perfect feeding ground for the highly migratory travelling fish.

“This information is important because it can help anglers to catch more swordfish. The data will also help to protect Cayman’s exclusive fishery against international rogue fishing fleets by establishing scientific evidence for international authorities that illustrate these fish are in the Cayman waters for certain time periods.”

He says the Challenge is the reason that the Cayman Islands is now being recognized as one of the top sword fishing destinations in the world.