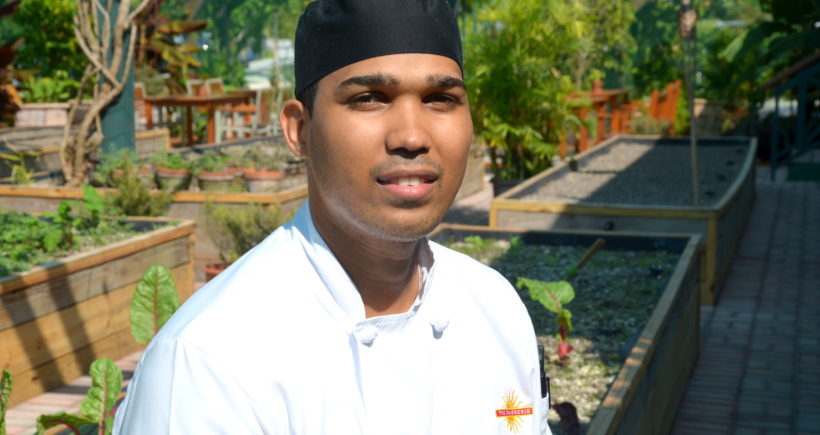 An up and coming Caymanian culinary artist, traveling the world, winning awards and taking on new challenges in The Brasserie kitchen. And he’s only 25 years old.

Diego’s photo is on a billboard. He is the recent recipient of the Proud of Them award, started in 2012 to highlight exceptional young people and demonstrate initiative and positive attitude. He attended high school in California on a basketball scholarship when he was 16.

Despite all his achievements at such a young age, Diego remains grounded, humble and more determined than ever to achieve his goals of one day establishing his own restaurant.

“I thought purslane was a weed. It grows alongside the road here in Cayman. That was until I walked into The Brasserie and realised the potential of such an ingredient. As a garnish or sautéed in replace of spinach.”

For now, he is soaking up as much knowledge and experience, techniques and skills that he can with Brasserie Chef de Cuisine Artemio Lopez and fellow chefs.

“I was asked to go and get lemongrass, so I went out to the cool room but I couldn’t find any. I came back and explained that we had run out, but soon discovered that I wasn’t going to find lemongrass in the cool room – but rather harvested fresh from the organic garden.”

Diego moved to California in 2014 where Caymanian cuisine was in short supply. His craving for home cooked food forced him to remember his favourite recipes handed down through four generations of his family.

“My favourite dish growing up in Cayman was – and still is – oxtail.”

He enrolled in a two-year program at Middlesbrough College in the UK where he obtained a Diploma in Professional Cookery/Culinary Skills Levels 1 and 2. At the same time, Diego worked at a Michelin star restaurant [the Hudson Brasserie Quay].

A three-month internship at ALMA Scuola Di Cucina in Italy, studying Italian cuisine and fine dining while cooking for guests of luxury Italian villas, sustained his love for travel. Toronto was next on the itinerary, where he completed a one-year postgraduate diploma course specialising in Italian cuisine.

While studying in Canada, Diego worked at The Chef’s House, a student-operated restaurant at George Brown College, where he had the opportunity to be featured as Chef of The Week. He was tasked with creating a menu from scratch that would be served to patrons of the establishment. His creations were so well received that the restaurant has adopted a few and they remain a fixture on the menu.

His passion to develop Caribbean culinary techniques led him back to Cayman and into the role of line cook at Hurley’s Supermarket Deli.

Now part of The Brasserie team, Diego’s  passion, drive and enthusiasm to learn is contagious. Keep any eye on this young Caymanian chef, who is poised to play an important role in further raising the country’s culinary profile.