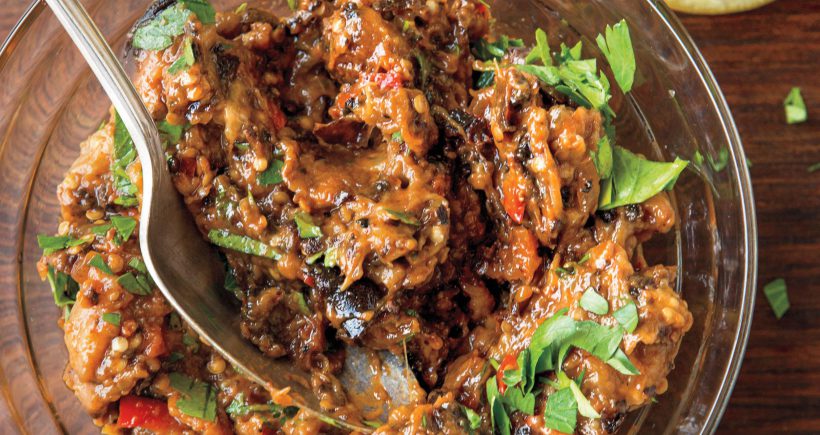 “This is probably my favorite eggplant preparation of all time. It first uses pan-frying to char and sweeten the flesh, followed by a second cooking with tons of vinegar. The result is a sweet, sour, and smoky salad that converts unsuspecting eggplant haters into passionate fan boys in a single bite. As a bonus, this recipe flouts all conventions of French technique by charring the eggplant until just before it’s burnt. Most of the chefs I’ve worked for would have made me throw it out if they saw it on my station. But by taking the eggplant to the edge, you can develop rich, deep, and almost chocolaty flavors that make this one of the punchiest bites there is. The flavor intensity of this salad makes it a great complement to roasted lamb, and it’s out of control as a sandwich addition.” – The Brasserie’s Harvest Dinner Guest Chef, Michael Solomonov.

Sprinkle the eggplant slices with the salt and let stand for 30 minutes on a paper towel or a rack.

Film the bottom of a large nonstick skillet with olive oil and set over medium-high heat. When the oil is shimmering but not smoking and working in batches if necessary to avoid crowding, remove the cooked eggplant to a plate. Add the eggplant slices in a single layer and cook until almost black on the first side, about 10 minutes. Turn and repeat on the other side, adding more oil as needed.

Add 2 tablespoons of the olive oil, the red pepper, onion, coriander, and paprika to the skillet. Cook, stirring occasionally, until the vegetables are very soft but not brown, about 12 minutes. Add the eggplant and sherry vinegar to the pan, breaking it up and mashing it coarsely with a wooden spoon until well combined. Cook until the vinegar has evaporated, about 8 minutes. Off the heat, add the parsley and lemon juice. Serve warm or at room temperature.