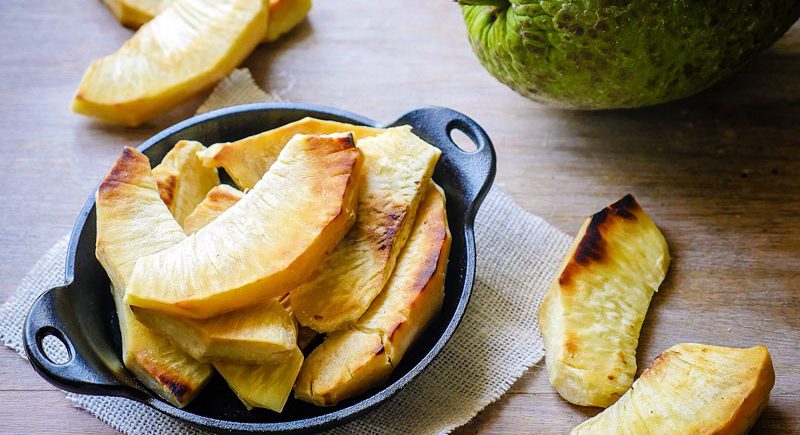 Have you ever wondered what the inside of a breadfruit looks like?

This dimply bright green orb the size of a cantaloupe has always created interest and intrigue. Why now for a breadfruit comeback? It’s high in fibre, antioxidants, calcium, iron and potassium.

The other great news is that you can eat breadfruit at any stage. When it’s small and green, it tastes like an artichoke. When it’s starchy and mature, breadfruit is the equivalent of a potato. When it’s soft and ripe, it’s dessert.

A traditional staple in Hawaii, breadfruit is sometimes called the tree potato, for its potato-like consistency when cooked. Except breadfruit has higher-quality protein and packs a healthy dose of vitamins and minerals.

That’s why this nutrient-rich staple is being cultivated for poorer, tropical parts of the world, giving us even more reasons to consider breadfruit as a superfood. The fast-growing perennial trees require far less labour, fertiliser and pesticides than crops like rice and wheat. They’re also more productive. A single tree yields an average of 250 fruits a year and can bear an abundance of fruit for decades.

Breadfruit grows on tall trees in tropical areas like Hawaii, Samoa, and the Caribbean. It’s high in energy from carbohydrates, low in fat and has more potassium than 10 bananas.

This fruit is an immune booster and is rich in amino acids that are essential to keeping our bodies fueled and functioning properly. It’s loaded with bioflavonoids, which fight inflammation, and contains high levels of thiamine to support digestive health.

So the next time you see breadfruit on our menu, enjoy this superfood, knowing that it is providing your body with plenty of nourishment.

Preheat an oven to 400 degrees. Cut the top of the breadfruit off and score the bottom with an “x”. Roast on a sheet pan for about 35-45 minutes or until you can insert a knife easily into the centre. Once cooked remove from the oven and allow to cool. Peel the skin by cutting with a knife. Dice the breadfruit into 1 inch cubes. Combine the aioli, green onion, peppers, scotch bonnet, vinegar, sour cream, salt and pepper in a mixing bowl and whisk until combined. Stir in the breadfruit. Season to taste. Meanwhile, pour about 1 cup of kosher salt into a baking dish and place the beet on the salt. Roast in the oven at 350 degrees until cooked though. Allow to cool and peel. Slice thinly and reserve for plating.