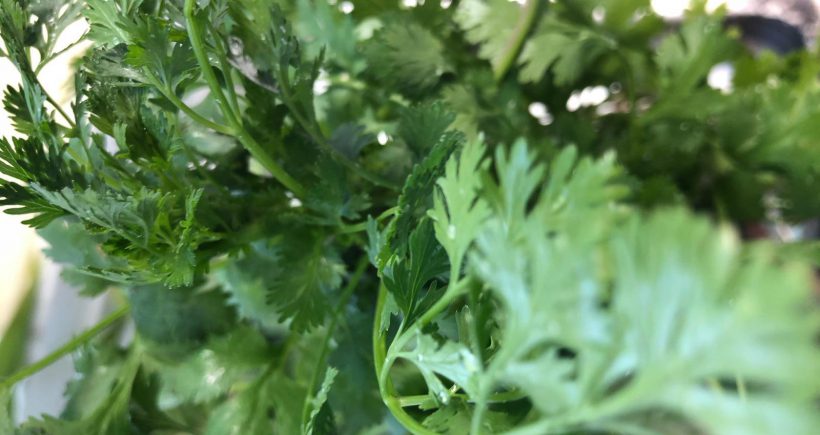 This versatile, bright and flavourful herb is flourishing in The Brasserie’s edible garden and popping up on our menu, giving a fresh boost of flavour without the need for added sea salt or other seasonings.

Cilantro, otherwise known as coriander, is a popular herb popular around the globe that resembles flat leaf parsley at first glance, but at first sniff, transports you to the Mediterranean, Mexico, Asia and India.

Low in saturated fat and cholesterol, cilantro is low in calories and a good source of dietary fibre, vitamins A, C, E, K, calcium, iron, potassium and magnesium.

The vitamin K and calcium content of cilantro helps to build strong bones, teeth and hair. Cilantro is considered the “anti-diabetic” plant in some parts of Europe, and research shows that it helps to lower cholesterol, lower blood pressure and supports healthy cardiovascular function.

Coriander has been used for thousands of years to treat digestive upset, gas, fungal and bacterial infections and to prevent food poisoning. Some studies show that it can help to lower blood sugar and even kill parasites in the digestive tract.

A recent study found that cilantro can protect against oxidative stress, through its high antioxidant effects. Oxidative stress is linked to a wide array of degenerative diseases including some types of cancer, heart disease, arthritis, Alzheimer’s Disease and macular degeneration.

Cilantro benefits your sleep cycle naturally and calms nerves, and can improve sleep quality through its natural sedative effects.

Used throughout the world for thousands of years to settle nauseous tummies, cilantro can prevent gas and bloating, relieve indigestion and heartburn and ease stomach cramps. It aids in efficient digestion, by helping to produce digestive enzymes that aid in the breakdown of foods. In many cuisines, fresh cilantro accompanies hot and spicy dishes because of its cooling effects.

Cilantro benefits not only detox the body but also protect it from infection and toxins. Its natural antibacterial properties helps to protect against both food and water borne diseases including food poisoning, dysentery, salmonella, cholera and particularly listeria. Research published in the International Journal of Food Microbiology studied dill, coriander and eucalyptus and found that cilantro was particularly effective in fighting listeria.

Cilantro is used both internally and externally as a remedy for skin irritations including hives, sunburns and poison ivy. It’s natural anti-histamines helps to calm the immune system response against allergens. Fresh cilantro and coconut oil can be blended together and applied to soothe sunburns, dry skin, poison ivy and hives caused by an allergic reaction.

In summary, cilantro has numerous health benefits and tastes best when picked straight from garden-to-mouth!