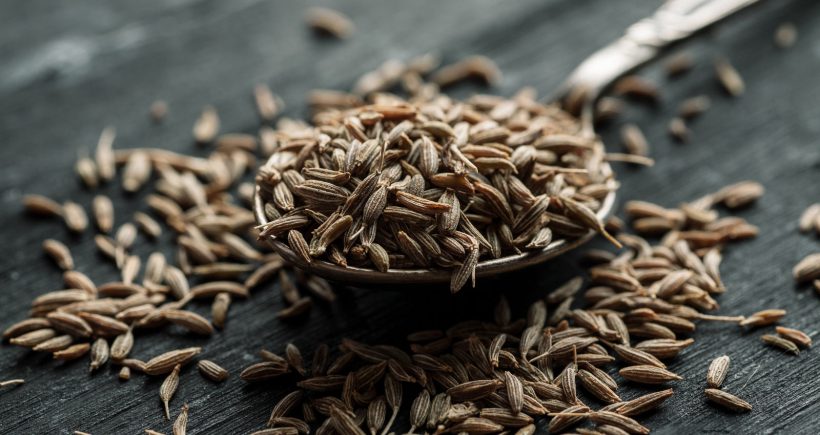 What is cumin and how do you pronounce it?

Cumin (KYOO-men) is herbaceous plant that grows from 12 to 20 inches in height and produces single-seeded fruit, oblong-shaped and yellow-brown coloured. Hold the seeds to your nose and you’ll smell a strong, earthy aroma.

The second most popular spice in the world (black pepper is number one) is one of the star ingredients in Chef Erik’s ‘Caboose Pork Rub’.

Cumin is extremely good for treating digestive problems. It is also a carminative, which means that it relieves you from gas troubles, and thereby, improves digestion and appetite. Due to its essential oils, magnesium, and sodium content, cumin promotes digestion and also gives relief from stomachaches when taken with hot water. The very aroma, which comes from an organic compound called cuminaldehyde, the main component of its essential oil, activates the salivary glands in the mouth, which facilitates the primary digestion of food. Next is thymol, a compound present in cumin, which stimulates the glands that secrete acids, bile, and enzymes responsible for complete digestion of the food in the stomach and intestines.

An abundance of iron, the presence of essential oils, vitamin C, and vitamin A in cumin boosts our immune system in a number of ways. Vitamin C is one of the most powerful antioxidants that stimulate the function and activity of white blood cells. It further helps neutralise free radicals that lead to many diseases, including, but not limited to, cardiovascular diseases.

Cumin is a rich source of iron which helps in increasing hemoglobin levels, improving blood flow and also promoting a healthy menstrual cycle.

The presence of caffeine (a stimulating agent), and the richly aromatic essential oils (the disinfectants) make cumin an ideal anti-congestive combination for those suffering from respiratory disorders such as asthma and bronchitis. It acts as an expectorant, meaning that it loosens up the accumulated phlegm and mucus in the respiratory tracts, and makes it easier to eliminate them from the system via sneezing or coughing up and spitting. By eliminating as much of the mucus and phlegm as possible, it can inhibit the formation of additional material and help heal the initial condition that led to its formation in the first place.

Cumin helps in protecting skin against fungal and microbial infections due to its disinfectant and antifungal properties. It also aids in reducing signs of premature aging like wrinkles, age spots, and sagging skin. This effect is due to the presence of vitamin E, which acts as an antioxidant and combats the free radicals.

A stimulant as well as a relaxant, some of the components in cumin essential oil are hypnotic in nature and have tranquilising effects, which also help relieve stress and anxiety that commonly cause insomnia.

Cumin extracts have anti-inflammatory and antiseptic properties that help in relieving pain and inflammation associated with arthritis.

Time for a taste! Head on over to the Caboose and speak to Chef Erik about his delicious pork ribs and pulled pork on the menu, as well as his pork rub containing cumin, available for purchase in cute litter jars at the counter (see below).