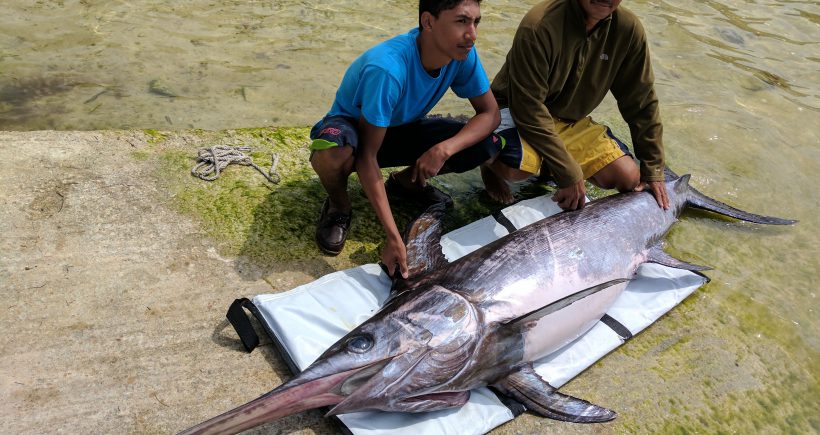 Imagine dropping a line in the water expecting to catch a snapper and you instead haul up a 270-pound and approximately 10-foot long swordfish. Lewis Wood and his son Malik found themselves in this position 12 days ago about five miles off the coast of Frank Sound, Grand Cayman.

Just two weeks out from the Cayman Swordfish Challenge, the catch was timely, emphasizing the thriving fishery that exists in the local waters.

“This is the first swordfish that I have ever caught,” exclaimed Lewis. “We visit this fishing spot every weekend. It’s right on my backdoor.”

“It was our first drop of the day”, said Malik.

“Normally when we deep drop for snapper we add a plastic leader spliced to the braid as a shock leader “top shot” so it gives a scope when you drop your snapper rig. This allows our snapper rig to lie on the bottom of the ocean giving us an even greater chance to get bites.

“In this instance, I decided to just use straight braided line and luckily we did, otherwise the line wouldn’t have been able to hold the swordfish.”

Within seconds of the line hitting the ocean floor some 430 meters down, Malik felt a sharp pull on the reel.

Malik described the line instantly going slack as he began reeling it in.

“I thought that whatever was on the line had broken off, when in fact the swordfish was actually swimming straight up to the surface. Rather than getting hooked, the fish had managed to tangle itself in the line as if it had swum straight into it.”

Three hours later Lewis and Mailk were lifting the swordfish into their 18-foot boat, but not without a fight.

“I had never seen a live swordfish before and when it came to the surface I couldn’t believe it,” Malik said.

“As soon as the fish saw us it quickly swam straight down to about 60 meters. I started reeling it back in with our electric reel and suddenly its entire bill came up out of the water at the bow of the boat.”

The swordfish headed for the ocean floor again and this time didn’t stop until the fishermen were almost to the end of their line.

“We have 467 meters of line on our electric reel and at this point we only had 20 meters of line left! We thought we were going to run out. I gently put my gloved hand on the reel to slow down the pace of the fish, and it responded.”

Lewis and Malik decided to work with the fish rather than against it. “We gently dragged the swordfish heading in the same direction as the ocean current and turned the boat to wind up slack with the electric reel.”

So, if you have been enjoying our delicious swordfish dishes at The Brasserie over the last week you have father and son, Lewis and Malik Wood, to thank for their mighty effort out on the water that day.