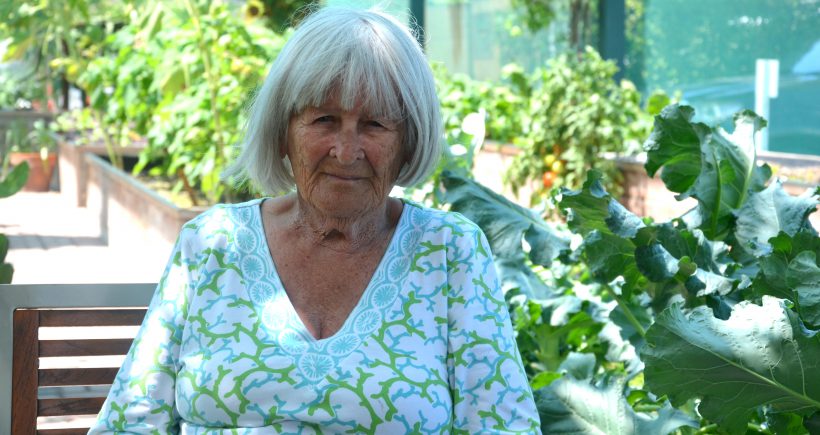 Margaret Barwick sits under the shade of the cashew tree in the Butterfly Garden, relaxed and smiling, as she surveys the edible plants and native foliage growing in Cricket Square.

“The trick is to plant foliage first and then the flowers are a bonus. If you get the foliage right, you get all the texture and color you need. You can always add a punch of color in afterwards if necessary.”

Now residing in France, it has been several years since her last visit to Grand Cayman, the place Margaret once called home.

A lot has changed since this skilled painter, gardener and landscape designer first arrived on the island in 1974.

“There would have been less than 20,000 people living here and you knew everyone in the supermarket when buying your groceries.”

In 1982 Margaret’s husband, David Barwick, was sworn in as the Governor of the British Virgin Islands. She swapped the paintbrush for the gardening gloves and turned her attention to the ambitious project of designing and developing the BVI’s Botanic Gardens.

Fondly known as the “Gardening Godmother”, Margaret’s creative flair and attention to detail caught the eye of many and on her return to Cayman in the late 80’s, her landscaping passion turned into a full time project as she joined forces with the Flowers family to turn Cricket Square into the thriving series of gardens that it is today.

“My most enjoyable mission was designing the ‘parklet’ or The Wicket garden. I wanted a place where people could sit outside and so I designed the key-shaped lawn. It was great fun.

“Gardens are like sandwiches. There has to be layers of education, experiment, science and beauty.”

The first phase of Cricket Square was planted with exotics and the second phase with fruit trees.

“It was the beginning of the farm-to-table movement here on the island and the start of The Brasserie kitchen garden also.”

It was while seated at her “desk” under a tree at what is now known as the Queen Elizabeth II Botanic Gardens on Grand Cayman, that the New Zealand-born artist decided to share her passion of native plants with the rest of the world.

“I volunteered my time to assist with developing the Gardens and with that came a lot of research into the different plant species most suited to the island’s sandy soil.

“My mother was a crazy gardener and I guess these genes were passed down to me.”

Margaret’s long lists of trees turned into one of her proudest achievements, Tropical & Subtropical Trees: An Encyclopedia.

“There was no handbook on how to put together a Botanic Garden, so I wrote it myself. Fifteen years of work and after travelling the world three times, spending a large percentage in Cairns, Australia working with horticulturalist Anton van der Schans, the book was published.

“Very few plants are unique to Cayman. There are only a handful of endemic plants due to the poor soil and low rainfall.

“Approximately 75 per cent of all native flora has been destroyed on Grand Cayman for development and my mission has always been to plant back as much as I can.”

Now in her mid-80’s, Margaret’s enthusiasm has not wavered as she prepares to prune the cashew tree while enthusiastically sharing her extensive knowledge and experience that so many people have had the privilege to enjoy.